In Calculus, we just finished our limits unit. I gave a test. It had a great question on it, inspired by Bowman and his limit activity.

Without further ado, it reads: 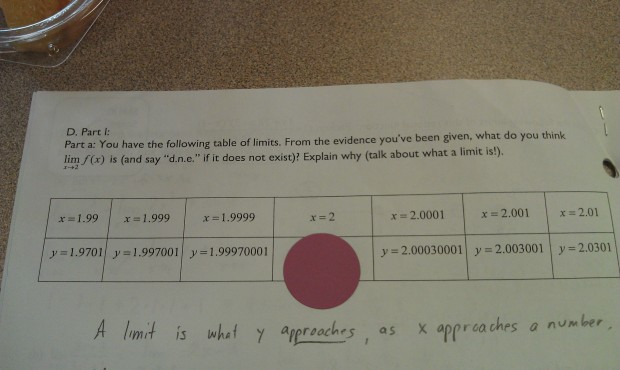 Which reads: “Scratch off the missing data. With the new information, now answer the question: What do you think the limit as x approaches 2 of the function is (and say “d.n.e.” if it does not exist)? Explain why (talk about what a limit is!).

So then they get this…

This is what I predicted. (And this was conjecture.) Almost all my kids are going to get part (a) right. I’ve done them well by that. However, with part (b), there are going to be two types of thinkers…

one kind of thinker, where they think “Mr. Shah wouldn’t give us this scratch off and this new data if the answer doesn’t change. So it has to change. What can it be? Clearly it has to be 2.5, because that’s the new information given to us. So I’m going to put 2.5 for the answer and then come up with some way to explain it, like saying since the function has a height of 2.5 when

the other kind of thinker, who will get the problem right and for the right reasons.

What’s the difference between the two kinds of thinkers? My guess: confidence. More than anything, this is a question that really gets at how confident kids are with the knowledge they have. You have to be pretty sure of yourself to come up with the right response, methinks.

My conjecture was pretty spot on. Let me tell you the responses are fascinating. So far my conjecture seems to be holding water. And it’s just the most intriguing thing to read the responses from students who got it wrong. The phrase that springs to mind is cognitive dissonance. There are a number of kids who are saying two totally contradictory things in their explanation, even from sentence to sentence, but they don’t recognize the contradiction. They’ll say “a limit is what y is approaching as x is approaching a number, and doesn’t have anything to do with the value of the function at the point” and then in the next sentence say “since the value of the function at x=2 is 2.5, we know the limit of the function as x approaches 2 must be 2.5.”

It’s a great question… my favorite test question of all time I think… but I wonder if that’s because of the scratch off.

I know we don’t tend to share student work often on blogs, but I asked and my kids were okay with me anonymously sharing their responses.

I don’t know exactly why I wanted to post student work. I don’t have anything specific I wanted to get out of it right now. But I know I was fascinated by it, and I figured y’all would be too.

But for me, it’d be interesting at the most basic level to just see the different ways our kids respond to questions in other classes… Even regular, basic non-writing problems! Just to see if anyone has ways to get kids to organize their work? Or if we could find a way to examine one student response to a question and throw around ideas about how to best proceed with the kid? Or talk about how we actually write feedback and what kind of feedback we give (and why)? Just a thought… Not for now, but something to mull over…