We’ve been working on the Law of Cosines in my precalculus classes. And I am having them prove it by scaffolding up from specific triangles to more general triangles. And then with the most general triangles, students consider acute, obtuse, and right triangles. 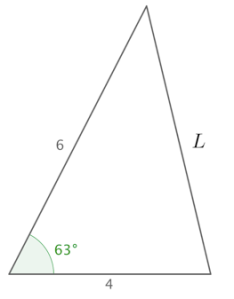 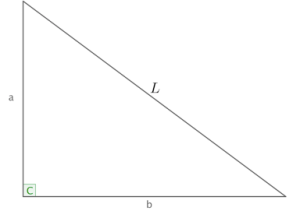 Kids tend to struggle a bit on the first triangle, but as soon as they realize they need to draw an altitude, they see all that opens up with right triangles and are good. After that, for the rest of the concrete ones, they tend to breeze through. The place where they first stumble again is when they get to the fifth triangle, the one with the angle

but then don’t go any further. But since I know I want them to get to the law of cosines, I tell them to expand and look for something nice. Sometimes I’ll give them the answer (

) and then say: work your work until it looks like this, with one trig function in it. From that point on, kids are in the zone.

For years, I used to teach this by giving kids waaaay too much information.

That being said, I ran across something quite beautiful. A stunning proof of the Law of Cosines (at least for acute triangles) on the site trigonography.

I love it because it looks like a proof for the Pythagorean theorem.  Which is nice because  the Law of Cosines is essentially a more generalized version of the Pythagoren theorem.

The area of the bottom square (the green one) is clearly the area of the top two squares (the red and blue ones) minus two green areas. Ummm….

anyone? You see the

, but what you also see is that you’re taking out some area (the green bits). [1]

When introducing it to my class, I showed them this image: 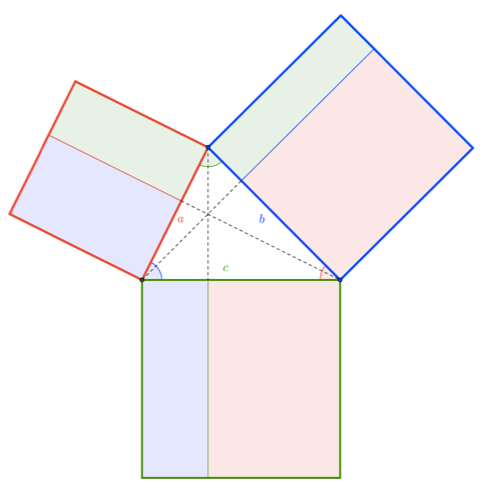 and said it was a proof of

And I just said to observe. To make statements based on what they see visually…Anything and everything. And if students could, see if they could make connections to the equation (but without writing anything down). After a short while of observations, I opened this geogebra applet and played around. I showed them what happened when we made angle C a right angle. 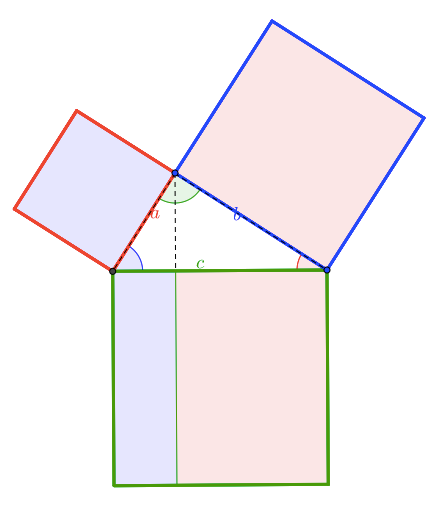 And kids eventually got there. They saw this argument, essentially…

…and they realized that the green rectangles were probably the thing that was being subtracted out in the law of cosines!

I love this proof of the law of cosines! Of course when I went online, I saw so many other beautiful proofs (look here, and the links at the bottom, for some). Troll the internet and be amazed! They are so elegant! This “scaling up” one might be my favorite. And here’s one that David Butler sent me (that is on the site I linked to above). And I remember proving the Pythagorean Theorem in geometry using the crossed chord theorem, and now the same argument here can be used for the law of cosines.

[1] To be clear, this diagram only works for acute triangles. I haven’t yet modified the argument to work for obtuse triangles.