I had only been teaching for about a month and half. I hadn’t learned the “mountain vs. molehill” principle, which — when I figured it out — changed my life. I was filled with insecurities, even though I had started gaining my sea legs. But the event conveyed in this email below kept me up all night. I was freakin’ out.

Wanna read the email?
Thought so.

A total disaster! So the test that I gave right after the fire drill? The students were making ALL sorts of careless errors and conceptual errors. I don’t know what it is — either it could be that it was Thursday last period, everyone was crazy after the fire drill, or students felt rushed. I told them they could finish the next day — and so I gave them an extra 12 minutes…

But once you see the grades, you’ll see why I’m freaking out:

I don’t know if I messed up teaching it, or if they were just all flustered, or what. Even the best students were really mucking things up. The mistakes ranged from sign errors to not simplifying to conceptual errors. What I’m thinking of doing is having a “make-up test” for them this Thursday during lunch or after school (whichever they can make it to). Is that sort of thing allowed? If they took it during lunch, when would they get a chance to eat? Or do you think I should give them “test corrections” for extra points on the test?

As for if they are totally missing the boat or not, I don’t know how to fix that since we’re starting on new things! Maybe each day my Do Now will be stuff from the last chapter?

I sound reasonable in this email. But internally, I was an absolute mess. How could I be such a bad teacher? It was one of those “take stock of things” moments. And I was coming up short. 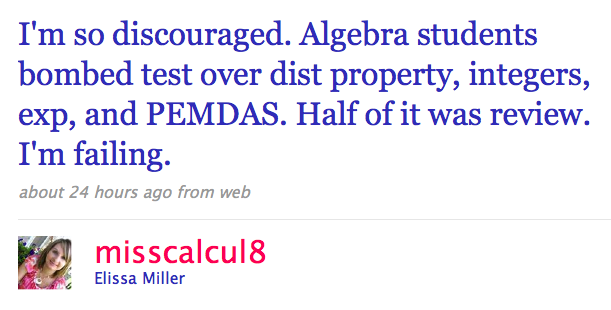 And it all felt so familiar. What’s great is that she has a support network with all our twitter buddies! Not that anyone can really help too much — I mean, we’re so far away from the situation we’re taking stabs in the dark on how to deal with it — but I can only imagine that the commiseration and advice was soothing.

I can just say that I didn’t have that on October 21, 2007. I was convinced that I was simply terrible, and that no other teacher had ever had a class bomb. No, seriously, I was so terrified that I believed that. (What a moron I was.)

I know I’ve grown a lot since those first few terrifying months, where I felt I was on trial — with the students, with the school, and most importantly, with myself.

As that first year went on, and I was exposed to some serious trial by fire, I found I slowly started to thrive. I dealt with a few (not many) challenging parent situations, had a few discussions with students who were acting out, actually sort-of yelled at a student when nothing else was getting through, coped with excessive absences of some students due to mono, and dealt with cheaters. A lot.

But as the year progressed, I got comfortable in my teacher skin. I gained my teacher voice. I learned to just lay my expectations and not try to justify everything or argue with students about them [1]. I learned not to be defensive.

But the only thing that does that is time.

So for anyone out there who might be new, and hitting their first major so-called-hurdle, just know that

(b) we’ve all probably gone through it too

(c) the best remedy is time and perspective.

If your teaching trajectory is anything like mine, I had a few bumps my first year, and my second year was smooth as silk. There wasn’t one major bump. I might have encountered the same problems again, but this time I knew what I needed to do when dealing with them.

Example? Last year my Algebra 2 students all bombed a take home quiz on quadratic applications. I knew they were going to. I rushed, taught it badly, and knew I was doing a bad job for the three days we worked on it. I wasn’t surprised by their (very low) quiz grades. So what did I do? I just fessed up. I told ’em I frakked up, and I knew it, and I couldn’t hold my mistakes against them. Quiz was wiped. We moved on from there. Not a huge deal. The previous year I wouldn’t have been nearly as mature as that.

[1] I’m requiring my Algebra II students to use a binder this year, and I got some pushback. “But I don’t like binders! Can I use something else?” “No.” “Why?” “Because I said so. But if you need, I’ll hold your hand when we use the binder, promise.”