At the math office today, two math teachers were discussing probability. Two things were surprising about it. One, it was a Saturday afternoon part of our winter break, so no teachers should have been on campus. (We’re a dedicated lot, us math teachers.) Two, the topic they were discussing was so simple, and yet, it reveals the real mind-bending character that probability has on us and our students.

The problems are seemingly the same. Let’s now look at this problem from the perspective of a venn diagram. 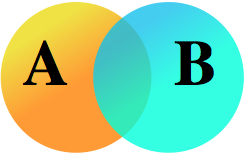 If we want to know the probability that event A or event B occurs, we clearly can see that we have:

(We have to subtract that last term, because we added that overlapping section twice when we took

Let’s apply that to our two questions:

Question 1: We have a probability of:

Question 2: We have a probability of:

However, let’s say we wanted to calculate

while in the second problem you cannot do that.

Recall that the definition of independence of two events

The teacher who brought up this problem was grading exams, and one student had calculated

. And seeing the two problems were almost identical, calculated

— which, as we know, isn’t right for dependent events.

What we were discussing is how we could explain to the student that the two situations are different, even though on the surface the questions seem like they are of the same form. In other words, is there a conceptual — non mathematical — way to explain that the first question involves independent events while the second question involves dependent events? It certainly isn’t intuitive, at least not to me.