Okay, so I think I’d like to have another go at skills 1 and 7.I don’t think I did as well as I should have because I didn’t read the questions carefully enough, and was not paying attention to some of the work I did on the test, making careless errors.Since the assessment, I have had my hand at both problems a second time through just to confirm my understanding, and I did a lot better.

Since the assessment, I have done the following specific things to make sure I understand the skill:
Since assessing and finally figuring out how to reassess, I met with you last week to understand how do these problems. I took back the problems that we used in class and did them over. I think I have an idea of how to do each problem now that I know how each one is done.

I would really like to reassess Skill #_1___. The reasons I think I didn’t do well on that skill are: I was having trouble on finding the y coordinate of holes and finding HA’s Since the assessment, I have met with this super awesome guy named Mr. Shah to go over my mistakes

Thanks Mr. Shah, I think I’m actually going to make it!! Going through and making this [list of what you think went wrong, and what you’ve done to fix those misunderstandings] has shown me that the errors I made are actually correctable. They’re simple. I got the basic concept, I just needed to figure out how to better employ them and be careful with signs and small things that make all the difference! It’s not impossible to do well!!

I was looking over my last assessment of skill #1 and why I didn’t do so well. I believe the problems I had with it were that I didn’t know how to get the y-coordinate of a hole or how to find the y-intecept of the rational function (at the time, I didn’t know whether to make all X’s equal to zero BEFORE canceling out, or after).  To help me understand skill #1 (specifically finding both coordinates of holes and also the y-intercept of the function) I tried practice problems found on the internet, I redid the problems from both assessments regarding skill #1 and made sure I understood how to get the correct answer.  To get the y coordinate of a hole, you have to plug the x coordinate of the hole into the function AFTER canceling out.  To find the y intercept of the rational function, you have to make all x values equal to zero (both in the numerator and denominator) to the function BEFORE cancelling out.

Here’s the blank email they’re required to fill out: 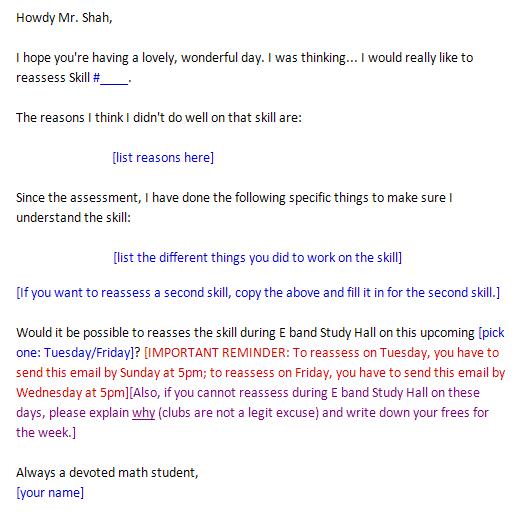 The conversation has changed. Students look at their assessments. They figure out their specific mistakes. They know what they know, and they know what they don’t know, and the work to figure out what they don’t know. When they meet, they don’t even say anymore “I’m having trouble with Skill 7.” They go into detail, saying what they do get, and precisely what they’re getting tripped up on. It’s not vague. It’s one of the most amazing things I’ve seen. And you can see just snippets of that above. In person they’re more specific, even, than in writing. They’re thinking about their own learning. It’s getting meta-cognitive in here.

Not that this new fangled SBG grading isn’t with it’s drawbacks. I am withholding judgment until the end of the first quarter. There are kids who are struggling. They are digging holes for themselves. There are kids who just aren’t ready to be in a calculus class, no matter how it’s being graded, and this is problematic. And this whole me meeting with students as much as I am now, that’s something that needs to change. [1] But the benefits. Oooh, the benefits are juicy.

[1] Tomorrow I’m showing them these three pretty self-explanatory images, and talk about them. They’re of my schedule. Clearly the conversation is going to be about me not being the first go-to resource. And that they need to start making study buddies and study groups, because different kids know different things well. And I will crash and burn if I keep up this meeting schedule. So we need to be respectful of that. 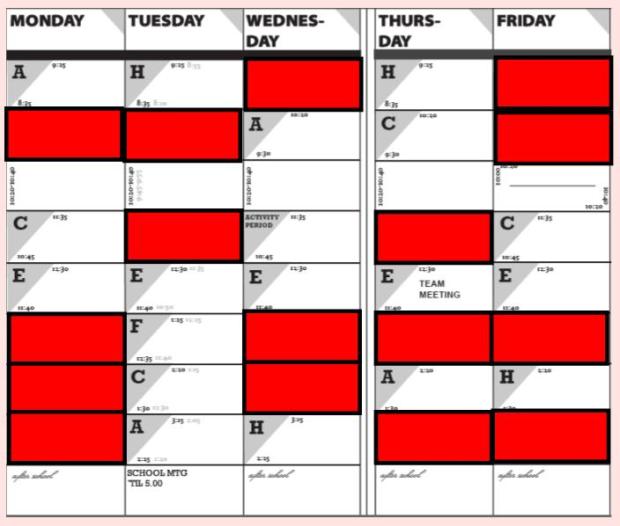 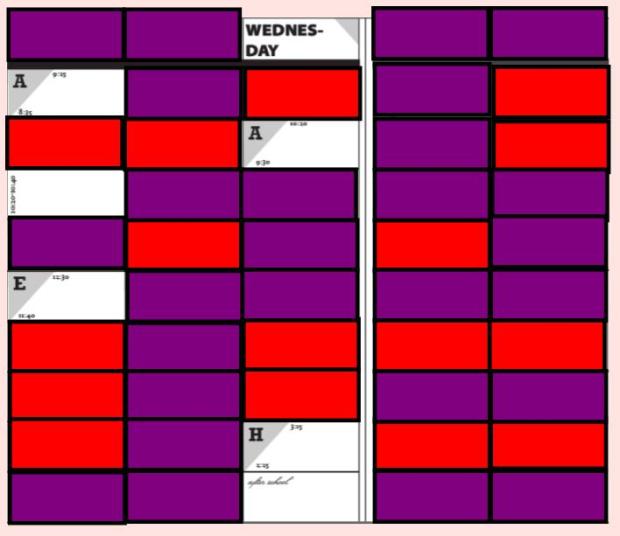