Yesterday in my Algebra II class I went a bit off the deep end in terms of tangents. We were studying complex numbers, and the day before, I had shown them Schrodinger’s Equation (which has i in it). One of my students wanted to know what it was, so I naturally told them.

I had this student research it and come to class and explain what he could suss out. He did, in a really funny way, and it was totes good times.

When he got to Schrod’s cat, however, his explanation fell a bit short, so I had him go back an re-research it. We’ll see how that goes.

Then when we were discussing how all our plethora of numbers fit together, we produced 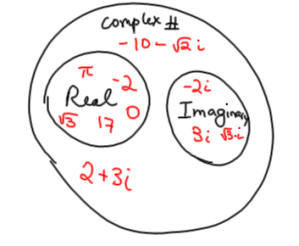 and of course, of course, a student raises his hand and asks “where does infinity go?”

Because the answer to that takes a long time to properly address, and I wanted to move on without spending 40 minutes on that question, I talked about how infinity was, for us, not a number but rather an idea of unboundedness. The game of “the highest you can go, I can go higher.” And of course, I gave them a teaser about the levels of infinity… I didn’t explain it, but I talked them through the basic conclusion (that the real numbers are a different level of infinity than the integers), and hopefully blew their minds by saying that the positive integers are the same level of infinity than the negative integers. 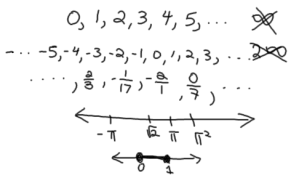 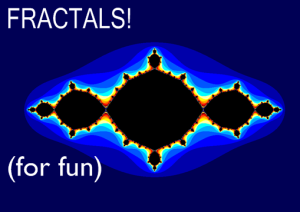 And that was DIVERSION 3.