At the end of last year, a science teacher and I came up with the idea of creating a math-science journal for students to publish their work in. Our school has a literary and art journal and even a foreign language journal. But there is no forum for students to show off their more mathysciency work…

There was a secondary reason for wanting to start it. We are in the middle of implementing our school’s strategic initiative, and that involves doing more project-and-problem-based-learning, and more interdisciplinary work. We thought that by having the journal, it might help drive some of these curricular changes by encouraging teachers to assign rich problems or projects that could be submitted to the journal.

It took a long time and a lot of work of many people to produce, and I wanted to take this post to outline the process of it’s development. However before I do that, take a moment and head over there and check it out! And if you want to see a few specific articles, here are some that I think you might enjoy to whet your appetite: the very model of a modern natural satellite, a challenging chalkboard problem, b-text, counting art, running in circles, transcendent fractions.

The other teacher and I crafted an initial document outlining what we thought the journal could look like, after brainstorming. We did this at the end of the last year. The one thing we both agreed on is that we didn’t want the journal to be ours but we wanted it to be the kids. These were just our initial ideas, but that’s all. When kids would get involved, they would take charge of what the journal would look like.

This is also the document we both shared with our head of school, our division head, and our department heads (math and science). We realized that if we didn’t have the support of these people, it wasn’t worth going forward with. But (as one would expect) they were all ecstatic about the idea. We also got permission to take some of the math department meeting and some of the science department meeting to introduce the journal to get teachers on board. I made a little slideshow with some ideas for how we could use it as a department, in an attempt to get the buy in from teachers. We encouraged teachers to make assignments next year that students could submit. Or if a student had an ingenious question, we could encourage them to research it and submit it to the journal. Or a student who had an out-of-the-box way of thinking about a problem, they could submit that. We emphasized that we wanted a low barrier for participation. We didn’t want kids to feel like they had to write a huge research paper or do all this independent work or be the best and the brightest to submit.

But we both have awesome colleagues, and everyone was on board.

So at the end of the year, after we saw this was something other people were willing to get behind, we sent an email about to a number of kids. We figured for the first year, to get it started, the other teacher and I would reach out to individual kids we thought might enjoy the process. (We figured that after the journal was established, the student editors would decide how the leadership would pass from year to year.) So we made a list of kids in various grades (because we wanted kids in various grades) and emailed them to see if any of them were interested. We got four responses, and so it worked out perfectly…. two juniors and two sophomores. Yay!

This was all at the end of last year. We left for summer.

And then we came back. After about a month into school, we had our first meeting with the editors.

We came up with adjectives to describe the journal, and listened to various ideas. And through our discussion, we were able to come up with a name for the journal. It just kinda popped out. This was important because we needed to start reaching out to others about it, and we needed something to call it.

We brainstormed ways to promote the journal (ideas: a facebook group, individually reaching out to clubs, having students make presentations in department meetings to get teachers on board, getting t-shirts made).

And we left with the following list of things we knew we needed to do.

The next big thing for us is that we needed to create a website where we could send people to, so they could learn about the journal.

It actually turned out to be that working on the website is the thing that gave concreteness to the abstractness. I met with a student who was going to lead the website effort after school. We did some planning: 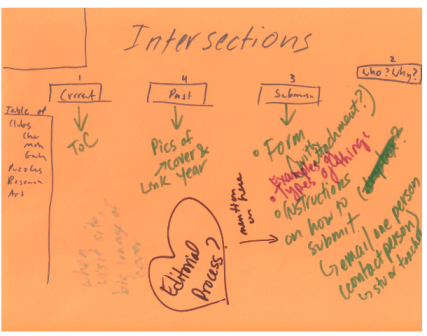 And as we did that, we realized that we needed a statement of purpose for the site written by the student editors, as well as an explanation as to why they agreed to work on it. In addition, we agreed that we needed to have a page with some example ideas of what students could submit, and finally, we needed a submission form and a method for students to submit.

It took a while, but eventually we created a way to get submissions (a form that students fill out and email to one student editor, who was going to be our submissions pointperson), a statement of purpose and a video trailer expanding upon it, and a page filled with the types of things that students can submit. We also started working on coming up with ideas for the cover and for the logo.

We still didn’t have an editorial policy. Would we accept everything that was submitted? How would we edit these articles? What if there were mistakes, or the submission was really unclear? However, we quickly realized we couldn’t make those decisions in this first year without having seen what sorts of things people were going to submit. So we tabled those more theoretical discussions and decided it was time to start soliciting submissions from students. We had the website, we had a process for kids to submit. Now we just needed to get buy in.

To do this, the students decided to reach out in various ways. Each student editor decided to become responsible for soliciting submissions from different groups.

And they did. And now that we had our website up, we could direct people there.

We also had signed up for a “Community Meeting” presentation. Every other week, the entire high school gathers together while a club or group gives a presentation about something or another. To get the word out, the kids created a 10 minute presentation to share with the community what the journal is all about, what sorts of things can be submitted, and how they can actually submit. The big thing we kept on remembering when designing this was that we wanted the journal to appeal to all students. As we had decided earlier, we wanted a low barrier for participation, and the kids emphasized that.

We also had come up with a submissions deadline, and we made that public for the first time.

They kids rocked it, and gave a hilarious and informative presentation.

Waiting… but not Patiently

But we weren’t passive. The kids brainstormed projects that students already had done in class, and went to those teachers. The kids heard when someone was going to submit something, and encouraged that student to follow through. I encouraged more than a few kids to take something they were interested in and turn it into something they could submit. We kept an unofficial ongoing list of people working on things that we knew were going to come to us, and for a few months, the student editors were each responsible for getting those people to follow through.

And through this process, the editors were being proactive, and because of that we got a good number of submissions!

We got a lot of great things, and we didn’t want to turn anything away, so we accepted all the articles that came to us. The student editors came up with a way to divy up who was going to edit each article, and they were going to have a second editor double check the work.

A couple editors took put the initial drafts of the articles online (a very time-consuming task), and then everyone else helped out with fixing things up and formatting them.

And finally, we came up with a way to divy up the articles into four different categories, I taught the kids how to make menus on the website, and then I let them go at it. You can imagine how much work that involved. But without a single complaint, they put everything online.

To launch Intersections, we planned a pizza party. We invited all people who submitted articles, as well as all the math, science, and computer science teachers, and the head of the upper school and the head of school. A ton of people came and partook in the pizza delight. The kids had planned a presentation to talk about the process of putting the journal together, and to highlight a few of the things in it. At the end of their presentation, the kids had secretly brought flowers for me and the other teacher! 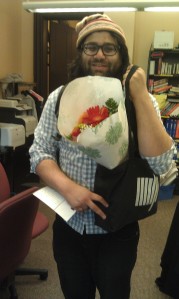 Most importantly, the launch party was the time where the kids who put in so much of their time for this journal were able to be seen, and get recognized for their hard work.

It was a primary goal of this project — for both me and the other teacher — to have this be a very student led enterprise. For it to be meaningful, they had to be in charge of it. They had to make the big decisions. They had to take responsibility for doing much of the heavy lifting. And I was more than impressed. They not only rose to the challenge, but surpassed every expectation I had. When we would talk about one thing, they not only would do it, but then have twelve more ideas that would come out of it, and do those too.

There are lots of next steps with this. The biggest thing that I feel needs to happen next year is to have more teacher participation. Although a few teachers clearly mentored students and encouraged them to submit, I feel we could have done a lot better on that front.