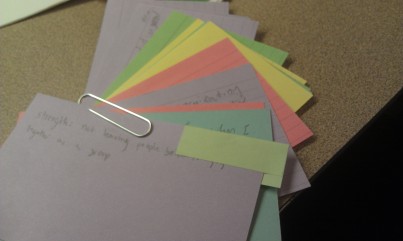 Today I switched up the groups I had in my Precalculus class and my two Calculus classes. All three classes have kids sitting in groups of 3 (and occasionally 4). They were with their original group members for the first half of the quarter. Now they are getting new group members.

I know this is a little hokey (and I tell them that), but I really want groups to get started on the right foot. I want kids to be thinking about how they interact in groups. I want kids to work at being a good group member.

Then I had them write their names on a notecard. On the front, they were asked to write something they thought was a strength of theirs when working in a group. Some examples:

Good at finding new ways to explain things to people, or simpler ways

I’m pretty articulate and willing to help if someone needs it.

I listen to your answer and compare. I do not think mine is always correct.

Not leaving people being / staying together as a group.

Then on the back, I had students write something they weren’t good at in a group setting, but wanted to work on. Some examples:

Sometimes I don’t ask questions when I might need to.

If I’m stuck I don’t ask for help enough.

If you’re moving too quickly through a problem for me, I typically won’t say anything.

I usually speed ahead.

Then I had kids go around and share what great quality they are going to be able to share with the group, and something they are going to pledge to work on with the group. What was nice is that in those few minutes when they were talking, I saw other people acknowledge and listen. One group noticed that together their strengths and weaknesses worked well together!

I know it’s hokey. I told them I knew it was hokey. But kids shared good things with each other. And maybe it’ll help a few kids be more aware of the others in their group too.