I’m soon going to embark on teaching the chain rule in calculus. I have found ways to help kids remember the chain rule (“the outer function is the mama, the inner function is the baby… when you take the derivative, you derive the mama and leave the baby inside, and then you multiply by the derivative of baby”),  ways to write things down so their information stays organized, and I have shown them enough patterns to let them see it’s true. But I have never yet found a way to conceptually get them to understand it without confusing them. (The gear thing doesn’t help me get it… Although I understand the analogy, it feels divorced from the actual functions themselves… and these functions have a constant rate of change.)

I think I now have a way that might help students to get conceptually understand what’s going on. I only had the insight 10 minutes ago so I’m going to use this blogpost to see if I can’t get the ideas straight in my head… The point of this post is not to share a way I’ve made the chain rule understandable. It’s for me to work through some unformed ideas. I am not yet sure if I have a way to turn this into something that my kids will understand.

So here’s where I’m starting from. Every “nice” function (and those are the functions we’re dealing with) is basically like an infinite number of little line segments connected together. Thus, when we take a derivative, we’re pretty much just asking “what’s the slope of the little line segment at

Now here’s the magic. In my class, we’ve learned that whatever transformations a function undergoes, the tangent line undergoes the same transformations! If you want to see that, you can check it out here.

For a quick example, let’s look at

which has undergone a vertical stretch of 2, a horizontal shrink of 1/5, and has been moved up 1.

Let’s look at the tangent line to

Now let’s put that tangent line through the transformations:

and our transmogrified tangent line: 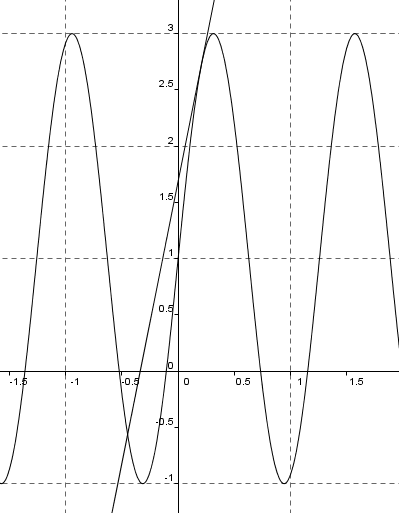 Yay! It worked! (But of course we knew that would happen.)

My Thought For Using This for The Chain Rule

So why not look at function composition in the same way?

Let’s see if I can’t clear this up by making it concrete with an example.

And so we can be super concrete, let’s try to find

, which is simply the slope of the tangent line of

I’m going to argue that just as

are composed to get our final function, we can compose the tangent lines to these two functions to get the final tangent line at

Let’s start with the

, the tangent line is

(I’m not showing the work, but you can trust me that it’s true, or work it out yourself.)

Now let’s start with the square root function. We have to be thoughtful about this. We are dealing with

which really means that we’re taking the square root of 9. We we want the tangent line to

So now we have our two line segments.

We have to compose them.

Let’s look at a graph of

and our tangent line: 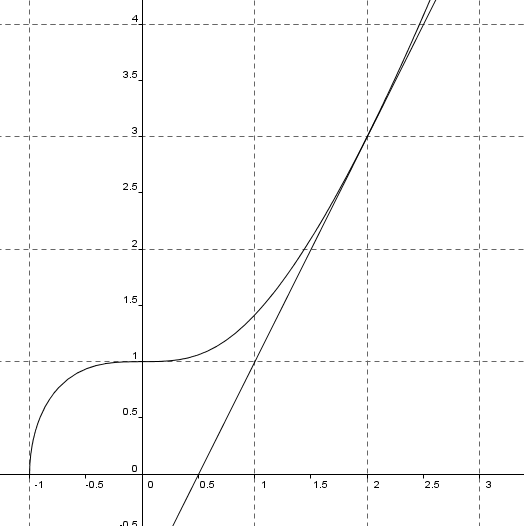 How we generalize this to the chain rule

For any composition of functions, we are going to have an inner and an outer function. Let’s write

where we want to find the derivative.

. That will approximate the function

The line segment of the inner function is going to be

The line segment of the outer function is going to be

I am going to keep those terms blah1 and blah2 only because we won’t really need them. Let’s remember we only want the derivative (the slope of the tangent line), not the tangent line itself. So our task becomes easier.

Of course we chose an arbitrary point

to take the derivative at. So we really have:

Which is the chain rule.