Yesterday, I told one of my precalculus classes how it was an exciting day. I was setting them up because it was election day, and kids at my school are heavily interested in politics, so I thought they’d say “yes! Election!” And I would say: “Actually, it’s because one of my best friends from college is having a baby.”

Of course that setup didn’t work, because of course a kid asked “why is today exciting?” Thanks, kid. But I told the class about my friend’s baby.

Yesterday evening, as the election results came in, I got more and more anxious. And when it was clear that Trump won, I was destroyed. I am not going to use this blogpost to explain my love for Clinton, or why Trump makes my blood boil. Instead, I want to just share how my day has gone.

I teach at an independent school in Brooklyn, and the population of kids and parents we serve are (for the most part) liberal. The kids are politically active and aware and interested. Today, I came to school and kids were destroyed.

In my first class, I talked to kids a bit, and then asked them what they wanted to do. After hearing them, I came up with the following plan. The kids who woke up to the news and wanted to learn more and get informed could read articles online. (There were about 4 of those kids.) I just asked that before they started reading, they take 3 minutes to type out all the questions that they have — so help them start processing. (Like “How could this happen? What was wrong with the polling? Who was voting for Trump? What does this mean for issue X?”). For the others, we formed a circle with the desks and I let kids talk. At points, kids cried. I didn’t join in — I wanted this to be a space for them. They expressed real sadness, hopelessness, optimism, anger, frustration, embarrassment, terror, empathy. I really heard my kids, and when talking about this election, they were speaking their truth, about their hopes and dreams (and how those hopes and dreams were altering). It destroyed me inside to hear them. To see how much this election has affected them. I guess I hated the fact that my kids are feeling what I’m feeling. I don’t want that for them.

I went to my second class, that precalculus class that I told about my friend’s baby. The first thing a kid said to me was inquiring about my friend’s baby. That small gesture — that this student would remember that — lifted my spirits. In this class, more wanted to read the news, and a handful of us talked. This discussion tended to a bit more political punditry — about the what’s and the how’s and less about their emotional state. I suspect they got many of their feelings out in their previous classes.

In my third class, we watched Hillary’s concession speech.I teared up twice during the speech. One kid left to gather themselves for a few minutes after the speech. I didn’t know what to do after. Kids said they didn’t feel like discussing things anymore — they were discussed out — but they also didn’t see how they could focus on work. I made the executive decision to spend the last 20 minutes of class having my kids watch the pilot of the West Wing. I hoped that some optimism in politics might help.

I have one more class to go. It’s a 90-minute block. I’m drained, right now. I don’t have much more in me. I suspect kids are also drained, but I don’t know. I’ll suss out how things are, and try to get through it.

I’m exhausted. Yesterday I woke up at 5:30am to vote. Yesterday I didn’t get to bed until very late (maybe 1pm), and then woke up at 3am to watch Trump’s victory speech. I then read articles until I forced myself to sleep from 4-6am.

When going over the nightly work, kids were actually focusing better than expected. They asked questions. They were able to answer questions. It was going well. I then ended up going on a fascinating tangent about fractals (related to one of the questions we talked about). And when I realized kids had never heard of fractals before, I showed them a youtube fractal video. Then they wanted to know how it was made. So I gave a short 10-minute lecture on the complex plane, and how the Mandlebrot set is formed. Kids were entranced by the video. I gave a 5-minute break before we sat down to talk about the election. (During the break, kids were in the hall watching more of the fractal video on one of their phones!) When we returned, everyone was silent. No one spoke. I just let it hang there. Eventually one voice. Then another. It wasn’t a rowdy discussion. Not everyone was in it. But most kids had something to say. And then when the day was close to ending, and there was a natural lull, I used a comment about “voting systems” to show a video about alternative voting systems. And then I let kids go home.

I just made the first four slides for class tomorrow. They’re not fancy. I’m tired. But I think they encapsulate what I’ve taken away from today.

Now I must end. I now have to change all my lesson plans for the upcoming days, prepare for parent visiting day tomorrow, and write narrative comments. This feels impossible. But I needed to process today.

UPDATE: A student gave me a paper flower she made today, to thank me for facilitating a conversation about the election in our class on Wednesday. And that flower is going to stay on my desk all year to remind me of the other things we do as teachers that can be meaningful. 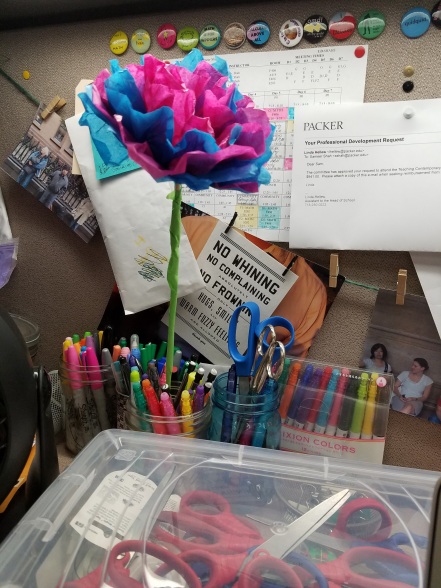