This year in standard precalculus, one of my collaborators shared an approach to dipping our toes into unit circle trigonometry that I loved. She learned it from at her old school. I love how math teaching ideas spread, percolate, adapt!

Here’s the gold: don’t start with a unit circle. We’re going to prime students with thinking about x and y coordinates for other shapes. In our case, we used: 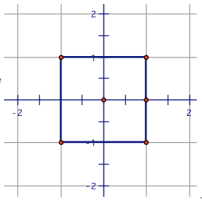 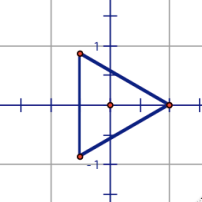 We placed a bug at (1,0) and had the bug walk counterclockwise around the figure at “unit speed” (one unit per second). And we asked questions about the position of the bug at various times, and had students create

graphs. The choices for the shapes that my colleague chose to use was inspired. Why?

They start out easy. The square is easy to come up with

graphs. The diamond (okay, geometry peeps, I know it’s a square!) is also pretty easy, except students have to recognize that it takes

graphs). It also… dum dum dum… harks back ye olde 45-45-90 triangle! Great when you’re about to start unit circle trig, no? And of course the last one is trickiest, because it requires the use of some deeper thinking and involves the pythagorean theorem and/or knowledge of 30-60-90 triangle!

You can imagine the great discussions that could arise, right? 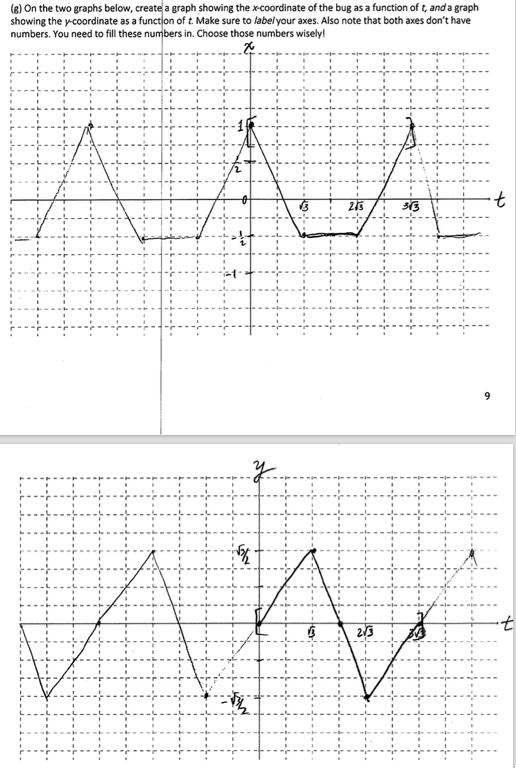 Some great topics of conversation:

What’s nice is that the term “periodic” came up naturally (so we could define what a period is). The idea of domain and range came up naturally. And, whoa, neat, some of the graphs were “the same shape but one was just a shift left/right of the other” (*cough cough sine cough cosine*).

I also love that this approach brings up parametrics for free! And the backwards question — giving

graphs and coming up with the path of the bug — is golden.

IMHO the introduction of unit circle trigonometry through this approach was marvelous. I am going to share with you the document we made for this (.docx ; PDF on scribd). However, I freely admit that I think this document didn’t lead to the smoothest classes. It felt like a series of exercises instead of a series of puzzles. Looking back, there was too much structure involved. I would have liked a bit more experimentation and play, and a little less formality, at the start. I have a few thoughts about this — especially around my attempt to have students make predictions, but I know I could have done a better job. (I see Desmos as being a possible tool if I were to modify this. I also wonder if it could be “gamified” in some way.) My only thought right now is to have a set of 5 shapes to start with (not the square, diamond, triangle) and 14 possible graphs. And students need to find an

graph for each of the five shapes (and 4 graphs are left over).

Being critical, overall I would give this approach an A- for “idea” and B for “execution.” As I noted, I could have structured things to be more smooth

Why A- for “idea” and not an A? It has a contrived framing. A bug is walking around a path. That framing doesn’t quite make me “excited” to study it. I’m not hooked as a student. Is there a related question or framing that could get me hooked? Any thoughts?

If you do end up using this idea, please share any changes you made in the comments if you remember… I’d love to hear how the general idea morphs when used other classes!

UPDATE:
The amazing Bowman Dickson created four different desmos applets (which I said I wanted in the post above). I am including them here (with his permission) so whenever I teach this again, I have them at my disposal. Note to self: the equilateral triangle applet has a slightly different position than my equilateral triangle in my packet, so I need to either remember to change my document or change the desmos applet!