Everyone here knows that I think Bowman Dickson is the bee’s knees, the cat’s pajamas, ovaltine! Recently he posted about how he introduces inflections points in his calculus class… and just a couple days later, I was about to introduce how we use calculus to find out what a function looks like.

Usually, I introduce this in a really unengaging lecture-format. But he inspired me to … copy him. And so I did, extending some of his work, and I have had an amazing few days in calculus. So I thought I’d share it with you.

The Main Point of this Post: By creating the need for a word to talk about inflection points on graphs, we actually saw the math arise naturally. And through interrogating inflection points, we were able to articulate a general understanding of concavity. In other words… the activity we did motivated the need for more general mathematical concepts.

First, definitely read Bowman’s post. All I did was formalize it, and extend it in a few ways, by making a worksheet. I put my kids in pairs and I had them work on it (.docx):

What naturally will happen when students generate their graphs is they will get a logistic function. (Which has a beautiful inflection point! But they don’t know the word… they just see the graph.)

So here we are. The students have a graph, and they’ve been asked to explain their graph for (a) the layperson and (b) the mathematician. Most get some of it done with their partners, and then they take it home to finish individually.

The next day, at the start of class, I assign students to work in groups of 3 (with different people than their partners the previous day). They are asked to take a giant whiteboard and:

(Now I want to give credit where credit is due. I have really been struggling with using the giant whiteboards well, and having students present their work effectively and efficiently. My dear friend Susanna, when I told her about this activity, suggested the groups, the underlining of the mathy words, etc.)

And they had such great observations. Some groups picked up on that change where the function was increasing in one way to increasing a different way. Others talked about how the rate of change (of infected over time) was greatest. Others talked about how the function was “exponential” for the first thing, seemingly linear for the middle third, and “something else” for the last third.

Those gave rise to good short discussions, and we came up with the language for inflection points (which I call INFECTION POINTS!!! GET IT!?!) and concave up/down.

After they had a sense what those words meant, I had students work in partners on the following (.docx):

The point was to get students comfortable with the ideas before we delve into the heavy mathematical lifting. It was powerful. Especially the last page, which got students thinking about patterns, exceptions, and ways to generalize. Our big conclusions: 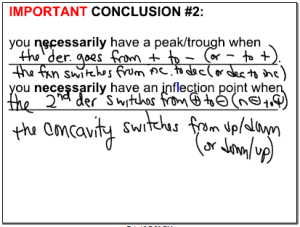 And with that, I’m too exhausted to type more. But that’s the general sense of what went on in an attempt to teach how to use calculus to analyze the shape of a function.