It’s been a long while since I’ve posted. It isn’t because I have nothing to post about! I’ve just been sooooo busy. This is the first year I’m teaching Geometry, and I’m working with the other teacher to turn it on it’s head. Completely. We haven’t cracked the textbook yet.

We started off the year with a very conceptual beginning, focusing on the importance of words, definitions, and classification. As you might have remembered from our first day activity, we have also been sprinkling in a good amount of conjecturing. [1]

I want to share one activity that I thought was not only was engaging, but led to really interesting discussions in my classroom.

On the second day of class, I had each of my geometry groups try to come up with a definition for the following words:

This is actually really challenging. I mean: you yourself, try to define a triangle without looking it up, or even more challenging, a polygon. Before starting, groups were told that other groups would try to find fault with their definitions, so they should be as specific and clear as possible.

Some things different groups wrote (all are problematic for various reasons):

Circle: “A circle is a closed figure where all the points are an equal distance from the epicenter, and starts and ends at the same point.”

Triangle: “A triangle is a 3-sided, 3-angled shape with straight lines that connect to the endpoints. Also, all the angles add to 180 degrees.”

Polygon: “Any shape that has exclusively straight edges that are all connected, and has to have at least three angles.”

What was awesome was the subtleties they ended up talking about when trying to find the counter-attacks. When talking about the circles or polygons, for example, they realized that we have to say this is a 2D figure, otherwise there are many other curves that would work. When talking about triangles, saying the figure had three angles was problematic because there are 3 interior angles and 3 exterior angles. For triangles and polygons, students realized how crucial it was to say that the figures were closed. I was so impressed with how they were really trying to attend to precision in this task.

Eventually, we looked at a textbook’s definitions for these three words.

It took us a while to understand these definitions, and why the particular language was chosen. The polygon definition was especially challenging — especially the second half!

I started the next class with the following DO NOW: 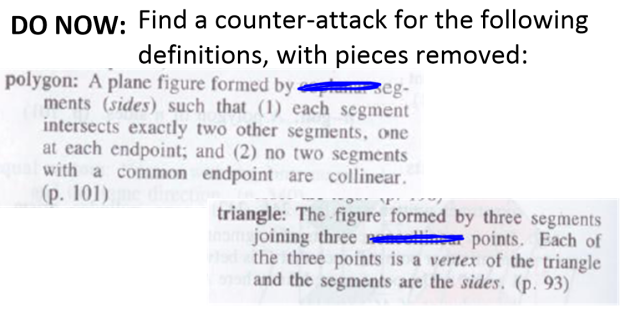 Although I thought this would be easy for them, it was interesting to see that they found this challenging and abstract.

We also came up with the following two questions for a mini-quiz we gave:

The ending of our first unit involved students coming up with their own definitions for the bunch of quadrilaterals (kite, dart, square, trapezoid, rectangle, rhombus, convex quadrilateral, concave quadrilateral, isosceles trapezoid, parallelogram). This opening activity was designed to make that exercise easier when we got to there. Specifically, it was designed to show them that clear and precise language is important to communicate your ideas, and it isn’t easy to come up with clear and precise language. Things that we “think we know” are really quite hard to pin down… Like what a circle, triangle, and polygon are.

UPDATE: I found some examples of “counterattacks” that my kids drew for various definitions, so I figured I’d scan them in for posterity… We came up with more when we were having our discussion.

And here is a random picture I took in class with two of the whiteboards:

[1] I’m finding this to be a really rewarding thing to have sprinkled in. I’m learning it’s challenging for students to be able to try to make a potential conclusion from a number of examples. But in fact, isn’t that a crucial skill in mathematics? We see a number of examples of something, we decide on a very plausible conjecture, and then we try to reason out why that conjecture is true (or come to realize it isn’t true)?