Today was my first day of classes — thirty minutes with each class just as a get to know you. Of course you know me. I dive right in and we did math in all of my classes.

Here are a quick snips from the paper folding activity.

The big idea was to get kids to realize that no matter which two points you chose initial to make that first fold, you’ll always end up with some things that are true in your final figure. Each student at a group folded two different pieces of paper — differently. Each group then looked at all their paper folds and made some great observations.

The couple that stood out to me:

When you make the folds, you will always end up with a pentagon. Some of the kids had a really small side, so they didn’t “see” the pentagon, but with a little prompting they did.

As a class, people shared their group’s observations. And then we focused on that third right angle. THAT IS WEIRD.

And so I sent the kids off to try to come up with some reasoning for why that third angle is always a right angle.

And this is where I had my good moments. This is not an easy question for the very first day of class. And with the 8-10 minutes they had, no group completely made a perfectly sound set of reasoning. But so many were making statements that were getting them closer to the answer.

A few groups noticed that the two folded triangles looked like they were always similar. (Indeed, I had totally missed that when I first did this problem…) Some kids were able to come up with the logic that if the triangles were similar, then they could actually prove the bottom point was 90 degrees. Loved it! (As of yet, no kid or group has proved that the triangles are similar.

And a few groups were also noting that when you unfold the paper, there is something really remarkable about the bottom of the page, with the two creases emanating from that point (which is the vertex of that 90 degree angle when folded). They noted that somehow — by folding up the two triangles — they are splitting the bottom of the page (a 180 degree angle) into three angles, where the middle angle is always 90 degrees.So they have a 90 degree angle, and then two smaller angles that add up to 90 degrees. I said: that’s awesome. Now how do you know that middle angle is 90 degrees, no matter where the creases are? (As of yet, no kid or group has explained this halving.)

They are getting there.

Even though I was nervous about this being too hard and even though I wanted to provide more hints and more structure… I let things be. I wanted it to be tough. It wasn’t about the answer, but about the process of talking with each other and thinking and persevering and reasoning.

In fact, I wrote on the board that kids can ask me for one hint to help them if they got stuck. No group asked for a hint!

I am excited to see what happens when I next see them (Monday). I am having them try to figure this out at home, and write up whatever they could discover. If they could figure out the reasoning, great. If not, what did they think about and attempt.

My one good thing from today was watching my kids think aloud and struggle aloud and come up with really interesting ideas. Ideas I thought they might come up with, and ideas that were fresh to my eyes!

Here are all our paper foldings! 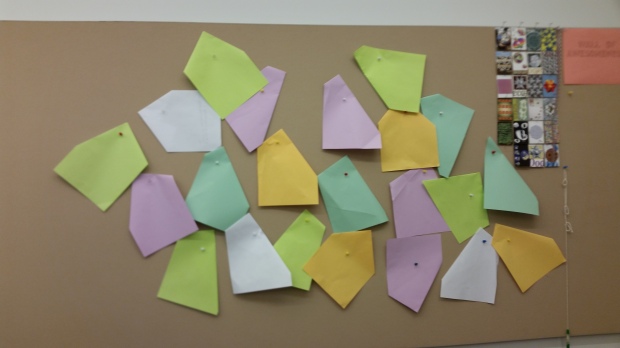 [Note: I am posting this both on the one-good-thing blog and my blog, because it both is a good thing and because it deals with teaching my classes!]