In Geometry, we’re about to embark on the whole triangle congruence bit (SSS, SAS, ASA, etc.).  Below is the plan we have outlined.

The TL;DR version: By learning about angle bisectors, we motivate the need for triangle congruence. We have students figure out when they have enough information to show two triangles are congruent. They use this newfound knowledge of triangle congruence to prove basic things they know are true about quadrilaterals, but have yet to prove that they are true. Finally, we return back to angle bisectors, and show that for any triangle, the three angle bisectors always meet at a point. As a cherry on the top of the cake, we do an activity involving salt to illustrate this point.

STEP 1: To motivate the need to figure out when we can say two triangles are congruent when we have limited information, we are showing a problem where triangle congruence is necessary to make an obvious conclusion.

We’re going to see the need for triangle congruence to show that:

any point that is equidistant to an angle (more precisely: the two rays that form an angle) lies on the angle bisector of that angle.

This will be an obvious fact for students once they create a few examples. But when they try to prove it deductively, they’ll hit a snag. They’ll get to the figure on the left, below. But in order to show the congruent angles, they’ll really want to say “the two triangles are congruent.” But they don’t have any rationale to make that conclusion.

Hence: our investigation in what we need in order to conclude two triangles are congruent.

When kids do this, they will also be asked to draw a bunch of circles tangent to the angles. All these centers are on the angle bisector of the angle. This will come up again at the end of our unit.

Kids will be doing all of this introductory material on this packet (.docx)

STEP 2: Students discover what is necessary to state triangle congruence.

This is a pretty traditional introduction to triangle congruence. Students have to figure out if they can draw only one triangle with given information — or multiple triangles.

We’re going to pull this together as a class, and talk about why ASA and SAS and SSS must yield triangle congruence — and we’ll do this when we talk about how we construct these triangles. When you have ASA, SAS, SSS, you are forced to have only a single triangle.

I anticipate drawing the triangles in groups, and pulling all this information together as a class, is going to be conversation rich.

Specifically, they are going to draw in diagonals in various quadrilaterals, which will create lots of different congruent triangles. From this, they will be asked to determine:

(a) Can they say anything about the relationship between one diagonal and the other diagonal (e.g. the diagonals bisect each other; the diagonals always meet at right angles)

(b) Can they say anything about the relationship between the diagonals and the quadrilateral (e.g. one diagonal bisects the two angles)

We have a few ideas percolating about how to have students investigate and present their findings, but nothing ready to share yet. The best idea we have right now is to have students use color to illustrate their conclusions visually, like this: 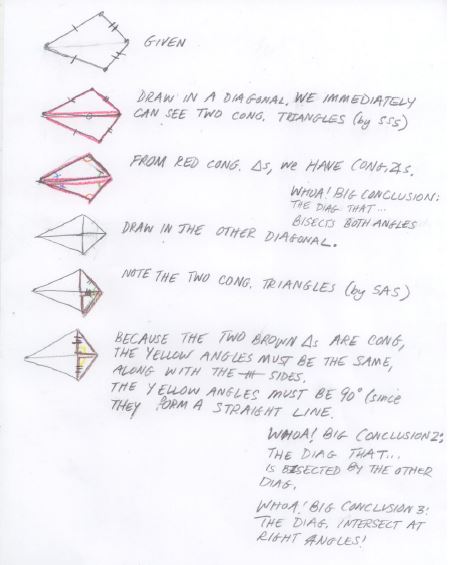 STEP 4: This is a throwback to the very start of the unit. Students will prove that in any triangle, the angle bisectors will always meet at a single point.

Here are the guiding questions (.docx) 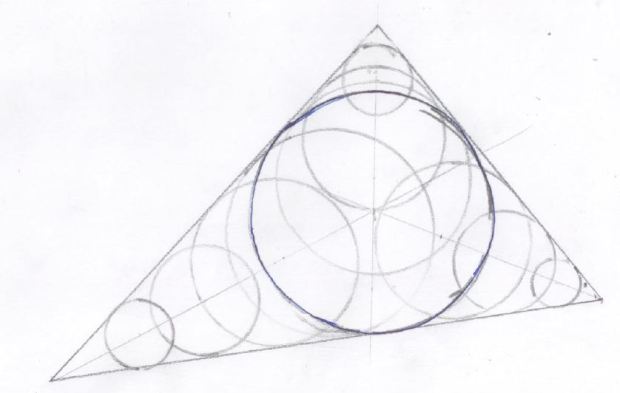 STEP 5: The reason we’re highlighting these circles is that we’re going to be cutting out various triangles (and other geometric shapes) out of cardboard, elevate them, and then pour salt on them. Ridges will form. These ridges will be angle bisectors. Why? Because each time you pour salt on something flat, it forms a cone. The top of the cone will the the center of the circle. We’re just superimposing a whole bunch of salt cones together to form the ridges.

The other geometry teacher and I both saw this salt activity at the Exeter conference years ago. Here are some images from a short paper from Troy Stein (who is awesome) on this:

As the figures get more complex, they should start thinking more deeply. For example, in the quadrilateral figure above, why do you get that long ridge in the middle?

My hope is that they start to visualize the figures that they are pouring salt on as filled with little cones, like this:

The material I’ve whipped up for this is here (.docx):