Yesterday in my geometry class, I deviated from my plan. (We had finished trigonometry, so when I told kids I was going to go off on a tangent, the groans were hearty and multitudinous.) I liked it so much that I did it in my other geometry class and my precalculus class.

You see, I have kids in five groups, and the groups sit at different tables each class. I have folders for each group prepared, and I throw the folders down randomly on the tables. Sometimes I let kids put the folders down — so they are dictating where everyone sits. THE POWER!

So yesterday, I had five folders and I wanted kids to put them down. How could I have done it?

There were seven ways to divide up the folders to give kids.

(I then said this was like factoring numbers, but with addition. So for example: 20 could be written as: 10*2, 5*2*2, 4*5, etc. But they had never been asked to think about this with addition! That’s what this folder problem was in disguise.)

And then I told them that before class, I calculated 7 folders (lie… I looked it up!) and got:

At the end, I asked each group to try to estimate (with reason, but without counting) what the answer for 8 folders would be.

While they were estimating, I pulled up a trailer to The Man Who Knew Infinity (a movie about Ramanujan and Hardy which was just released last Friday and was still in theaters…) When I asked each group to share their answer, but without giving any rationale, every group predicted 23.  Do you see why?

Let me show you what the board looked like after they explained their reasoning… (one image is from one class, one is from the other)… 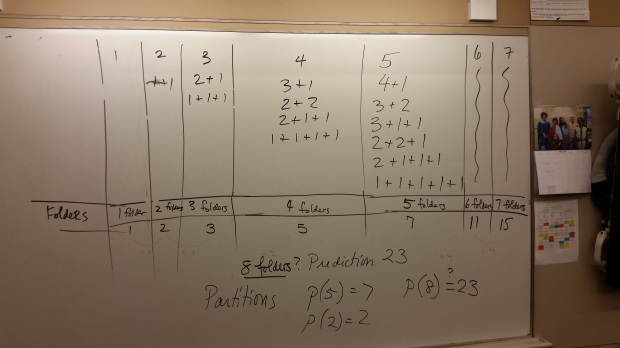 Then I had kids watch the trailer to The Man Who Knew Infinity:

When it finished, I told them it was still in theaters and it made me cry! And then I said the mathematicians in this movie were very famous — any math major or mathematician will have heard about them… And what were they working on in this film? Our folder problem! (At this point, I had given them the name of the function we were working with: the partition function.) The question was: given any positive integer, could they figure out exactly how many partitions it has without listing them all out?

Then I pulled up the Wikipedia page on partitions and we looked at some more values:

ARGH! It’s at this point the kids see their prediction for 8 folders (23) wasn’t correct (the value is 22!). And we note that the numbers start growing slowly, but then they seem to be growing faster and faster!

I then pull up desmos and type in:

and say that part of the film involves the mathematicians discovering this formula is a pretty good approximation for the number of ways to distribute n folders… if n is large. And we start looking at the graph to see how it compares to the values we find.

It’s actually pretty bad for small n values, but as we try getting to higher n values, we see how high we have to change the window to see the output! Also: weird! Pi is involved?!? And a square root of 3? Whaaaa? (And when I did this in precalculus, kids knew what e was so it was even weirder… but in geometry, kids didn’t so I merely mentioned it was a number like pi but with a value of about 2.71.) [1]

All of this came out of me giving myself permission to go on a tangent… We spent probably 15-20 minutes doing this in each class (I had to do it in my others after I did it on the fly in the first class). But in this 15-20 minutes, I felt like I was alive, and that I was bringing to my kids something I am not able to give them in a traditional curriculum. (It felt like it dovetailed a lot into what I wrote in this post about inspiration and mathematics a few weeks ago.)

Kids were asking great questions, and were talking about other random neat math things. I let that happen briefly… but the ticking clock was getting at me. So then we went back to our regularly scheduled program.

[1] In precalculus, we had just finished working with hyperbolas. So after I told kids that this function was good for huuuuge values of n but bad for small values of n, and asked kids what that reminded them of. Two students immediately saw that the equations we came up with for the end behavior of they hyperbola was exactly this… It is terrible for small values of x but great for large value of x!