I didn’t have a clear idea of what to do in multivariable calculus for the block. I still had to cover content, but I wanted it to be “different” also. After many hours of brainstorming, I came up with a solution that has worked out pretty well this year.

We had a book club.

Now, to be clear, this is a class of seven seniors who are highly motivated and interested in mathematics. I can see ways to adapt it in a more limited way to other courses, with more students, but this post is about my class this year.

Why? Because after they read this, they understand why I can’t help them visualize the fourth (spatial) dimension! But it convinces them that they can still understand what it is (by analogy) and makes them agree: if we can believe in the first, second, and third spatial dimensions, why wouldn’t we believe in higher spatial dimensions too? It’s more ludicrous not to believe they exist than to believe they don’t exist! A perfect entree into multivariable calculus, wouldn’t you say?

After reading this, we read the article “The Paradox of Proof” by Caroline Chen on the proposed solution to the ABC conjecture. 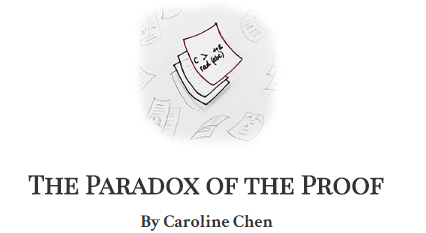 This led us to the notion of “modern mathematics” (mathematics is not just done by dead white guys) and raised interesting questions of fairness, and what it means to be part of a profession. Does being a mathematician come with responsibilities? What does clear writing have to do with mathematics? (Which helps me justify all the writing I ask for on their problem sets!) It also started to raise deep philosophical questions about mathematical Truth and whether it exists external to the human mind. (If someone claims a proof but no one verifies it, is it True? If someone claims a proof and fifty people verify it, is it True? When do we get Truth? Is it ever attainable? Are we certain that 2+2=4?)

At this point, I wanted us to read a book that continued on with the themes of the course – implicitly, if not explicitly. So we read Steve Strogatz’s The Calculus of Friendship:

What was extra cool is that Steve agreed to sign and inscribe the book to my kids! The book involves a decades long correspondence between Steve and one of his high school math teachers. There are wonderful calculus tricks and beautiful problems with explanations intertwined with a very human story about a young man who was finding his way. Struggling with choosing a major in college. Feelings of pride and inadequacy. The kids found a lot to latch onto both emotionally and mathematically. Two things: we learned and practiced “differentiating under the integral sign” (a Feynman trick) and talked about the complex relationship that exists between teachers and students.

After students finished this book, I had each student write a letter to the author. I gave very little guidelines, but I figured the book is all about letters, so it would be fitting to have my kids write letters to Steve! (And I mailed the letters to Steve, of course, who graciously wrote the class a letter back in return.)

Our penultimate reading was G.H. Hardy’s A Mathematician’s Apology:

I went back and forth about this reading, but I figured it is such a classic, why not? It turned out to be a perfect foil to Strogatz’s book — especially in terms of the authorial voice. (Hardy often sounds like a pompous jerk.)  It even brought up some of the ideas in the “Paradox of Proof” article. What is a mathematician’s purpose? What are the responsibilities of a mathematician? Why does one do mathematics? And for kids, it really raised questions about how math can be “beautiful.” How can we talk about something that is seen as Objective and Distant to be “beautiful”? What does beauty even mean? Every section in this essay raises points of discussion, whether it be clarification or points that students are ready to debate.

What is perfect about this reading is at the same time we were doing it, the movie about G.H. Hardy and S. Ramanujan was released: The Man Who Knew Infinity (based on the book of the same name).

Finally, we read half of Edward Frenkel’s Love and Math:

Why? Because I wanted my students to see what a modern mathematician does. That the landscape of modern mathematics isn’t what they have seen in high school, but so much bigger, with grand questions. And through Frenkel’s engaging telling of his life starting in the oppressive Russia and ending up in the United States, and his desire to describe the Langland’s program understandably to the reader, I figured we’d get doses of both what modern mathematics looks like, and simultaneously, how the pursuit of mathematics is a fully human endeavor, constrained by social circumstances, with ups and downs. Theorems do not come out of nowhere.Mathematicians aren’t the blurbs we read in the textbooks. They are so much more. (Sadly, we didn’t read the whole thing because the year came to a close too quickly.)

STRUCTURE OF THE BOOK CLUBS

I broke the books into smaller chunks and assigned only them. For Flatland, it might have been 20-30 pages. For Love and Math or A Mathematician’s Apology, it might have been 30-50 pages. We have our long block every 7 school days, so that’s how much time they had to read the text.

At the start, with Flatland, students were simply asked to do the reading. Two students were assigned to be “leaders” who were to come in with a set of discussions ready, maybe an activity based on something they read. And they led, while I intervened as necessary.

For every book club, students who weren’t leading were asked to bring food and drink for the class, and we had a nice and relaxing time. On that note,  never did I mention anything about grades. Or that they were being graded during book club. (And they weren’t.) It was done purely for fun.

Later in the year, I had students each come to class with 3-4 discussion questions prepared, and one person was asked to lead after everyone read their questions aloud.

The discussions were usually moderated by students, but I — depending on how the moderation was going — would jump in. There were numerous times I had to hold back sharing my thoughts even though I desperately wanted to concur or disagree with a statement a student had made. And to be fair, there were numerous times when I should have held back before throwing my two cents in. But my main intervention was getting kids to go back to the texts. If they made a claim that was textually based, I would have them find where and we’d all turn there.

Sometimes the conversations veered away from the texts. Often. But it was because students were wondering about something, or had a larger philosophical point to make (“Is math created or discovered?”) which was prompted by something they read. And most of the times, to keep the relaxed atmosphere and let student interest to guide the conversation, I allowed it. But every so often I would jump in because we had strayed so far that I felt we weren’t doing the text we had read justice (and we needed to honor that) or we were just getting to vague/general/abstract to say anything useful.

I mentioned students generated discussion questions on their own. Here are some, randomly chosen, to share:

In many ways, I felt like this was a perfect way to use 30 minutes of the long block. After doing it for the year, there are a few things that stood out to me, that I want to record before summer hits and I forget:

(a) I think students really enjoyed. It isn’t only a vague impression, but when I gave a written survey to the class to take the temperature of things, quite a few kids noted how much they are enjoying the book clubs.

(b) For the post-Flatland book club meetings, I need to come up with multiple “structures” to vary what the meetings look like. Right now they are: everyone reads their discussion questions, the leader looks for where to start the discussion, the discussion happens. But I wonder if there aren’t other ways to go about things.

One example  I was thinking was students write (beforehand) their discussion questions beforehand on posterpaper and bring it to class. We hang them up, and students silently walk around the room writing responses and thoughts on the whiteboard. Then we start having a discussion.

Or we break into smaller groups and have specific discussions (that I or students have preplanned) and then present the main points of the discussion to the entire class.

Clearly, I need to get some ideas from English teachers. :)

(c) I love close readings of texts. I think it shows focus, and calls on tough critical thinking skills. At the same time, I need to remember that this is not what the book clubs are fundamentally about. They are — at the heart, for me — inspiration for kids. So although for Flatland I need to keep the critical thinking skills and close readings happening, I need to remember (like I did this year) to keep things informal.

(d) Fairly frequently, I will know something that is relevant to the conversation. For example, I might talk about of the math ideas that were going over their heads, or about fin de siecle Vienna, or branches of math that might show how the line between “theoretical” and “applied” math is blurry at best. I have to remember to be judicious about what I talk about, when, and why. We only have limited time in book club, so a five minute tangent is significant. And one thing I could try out is jot down notes each time I want to talk about something, and then at the end of the book club (or the beginning of the next class), I could say them all at once.

(e) I usually reserve 30 minutes for book club. But truthfully, for most, 40 minutes turned out to be necessary. So I have to keep that in mind next year when planning class.

(f) Should we come up with collaborative book club norms? Should I have formal training on how to be a book club leader? Should we give feedback to the leaders after each book club? Can we get the space to feel “safe” where feedback could actually work?