Megan Schmidt is obsessed with spirals. Her obsession got me hooked — for hours — on a math problem. I thought it would take maybe an hour or two, but I’m still at it and I’ve probably been working four or five hours.

I’ve been having so much fun with it.

Here’s the problem. Look at the spiral below… 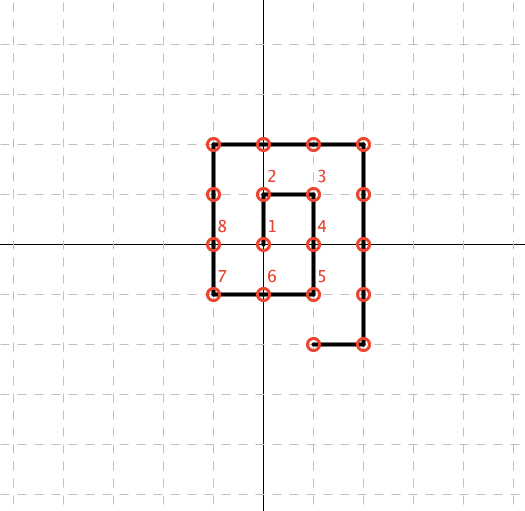 If we continue this spiral in this manner, can you come up with a formula for the coordinates of the kth number?

One easy way around this is to write a computer program that just brute forces our way through it. So here’s the constraint: I want a closed formula for the x-coordinate and y-coordinate. That means no recursion! No if/then statements! Just an equation that relies on k only.

You know one of the most frustrating things? Going down a path and feeling good about it, even though it is pretty complicated. And then having a new insight on how to attack the problem (which *just* happened to me now as I typed up the problem and look at the image I created for this post) [1]. And realizing that approach might yield it’s secrets so much easier!

In any case, I thought I’d share the problem because it’s given me so much enjoyment thus far. If you do get obsessed and solve it, please feel free to put your answer in the comments. I have a feeling there are a variety of valid solutions which look very different but yield the same answer.

[1] What this reminds me is how slight changes in representations can lead to new insights! Before I was using this image that Megan sent me: 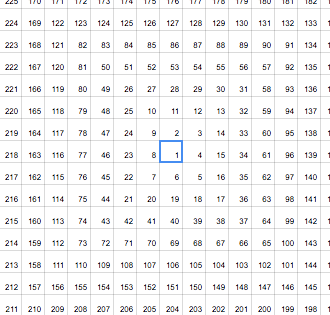 UPDATE!: I solved it!

If you want to see that I did solve it, check out this Geogebra sheet. It won’t give away how I solved it (unless you download it, look at how I defined each cell, and then reverse engineered it).

I am so proud of myself! I came up with a closed form solution!!!

I am going to put a “jump” below here, and then show what my solution is, and write a little about it. So only read below the jump (meaning: after this) if you want some spoilers.

NOTE: There is a small error in the solution below… I defined M=floor(sqrt(k)-0.001). It turns out that almost always works until you hit huge k values near perfect squares (I know, I know). However the real solution has M=floor(sqrt(k-1)). That fixes all the problems, I think. You can read below about the solution, and then how I caught my error, and how I fixed it.

Okay, so this was an insane problem. To make the formula for the coordinates where any k value exists simpler, I defined a new variable M [for Megan, who nerdsniped me with this problem!] which was equal to: M=floor(sqrt(k)-0.001).

I know, I know, it’s so ugly! And what I think is so insane about this is that now I see so much simplicity and structure in the equations. It doesn’t look like gobblygood to me. But looking at this as an outsider who maybe didn’t attack the problem, I wouldn’t know how in the world someone would come up with this. It feels impossible!!!

I am going to try to give a little sense to the structure of this solution, without going into all the ugly details about how it came about. (I would actually love to show the process, but it would take a mini-novella to trace my thinking. And I have a terrible memory. Though when I ran out of paper at the coffeeshop I was working at, I did start working on a googledoc, so some of my thinking is archived.)

Let’s look at the pieces of the solution structurally:

There are three parts to the solution: the underlined bit, the swirl bit, and the zigzag bit.

Let’s look at the underlined bit. What this part of the solution does is find us a coordinate near the right coordinate. To see this concretely: 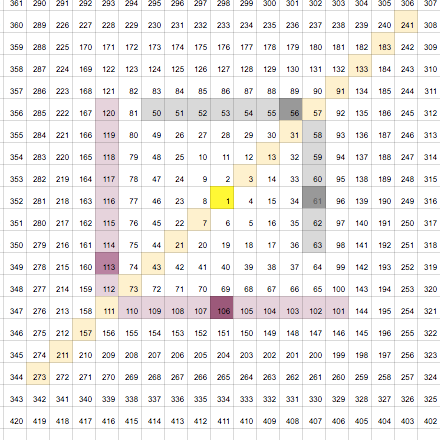 For any k value, the underlined part will yield one of the yellow squares in that diagonal.

So the underlined part of the solution gets us close to the answer, but not quite fully there.

So all we need to do is figure out a way to move us up/down/left/right appropriately.

What the swirl bit of the equation does is precisely that. It calculates how far up/down/left/right I need to move (where up and right are positive values and down and left are negative values…).

However there’s a problem! How do you alter the equation so you are only moving up and not also right? You don’t want to move both directions from the yellow square — only one of them! (So, look at the 106 or 113… we only moved in one direction from 111, not both.) If we only had the underlined part and the swirl part of the equation (but not the zigzag part of the equation), we would always start at a yellow square near our true answer, but then we would move both horizontally and vertically. That’s a problem. To get to any of our values, we only need to move horizontally or vertically.

Similarly for the y-coordinate equation, we have the exact opposite zigzag piece…

And since the two zigzag pieces are “opposite,” what we only ever move horizontally or vertically, but never both.

Evaluating k=113, we get the following for the x- and y-coordinates:

Notice the underlined part put us at the coordinates (-5,-5) (the yellow square with 111). That fixed us near the true value of the coordinate. Then the swirl part said we need to move either up/down/left/right two units. And the blue part says: actually, we only want to move vertically, so ignore the horizontal motion.

Let’s do it one more time with a different k value. Let k=56, we get the following for the x- and y-coordinates:

Notice the underlined part put us at the coordinates (4,4) (the yellow square with 57). That fixed us near the true value of the coordinate. Then the swirl part said we need to move either up/down/left/right one unit. And the blue part says: actually, we only want to move horizontally, so ignore the vertical motion.

Although the original equation looks super complicated, it may seem less complicated now! There’s some thinking behind the structure!

This being said, I am absolutely sure there are myriad equations which will work, and mine is probably one of the uglier ones. I started down a path that got a bit circuitous, and I have a feeling that if I were to try this again in an attempt to come up with a simpler answer, I would be able to do so!

Update 2: Of course there’s an error.

So when verifying my work on geogebra, I was hesitant about the fact that in order for me to make things work out when writing my solution, I had to shift things around a bit. So I had that weird thing called M which was floor(sqrt(k)-0.01). I had to subtract that 0.01 because I was having issues with perfect squares, but nothing else.

Turns out that was a bad idea… I started thinking about if that could mess things up for high values of k which happen to be near perfect squares (which, visually, means at the corners where you switch from going one direction to another as you walk along the spiral). And this is what I found… it does mess things up. Check it out… 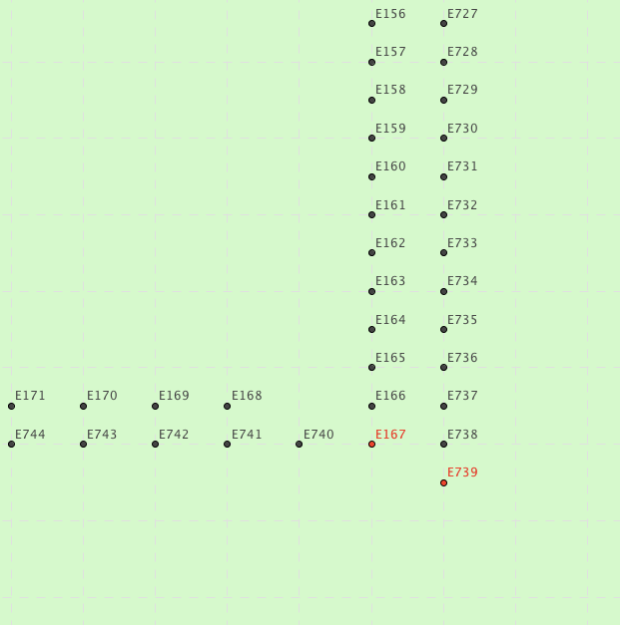 These two red dots represent 20166 and 20738. You can see they are just a bit away from the location they should actually be at! 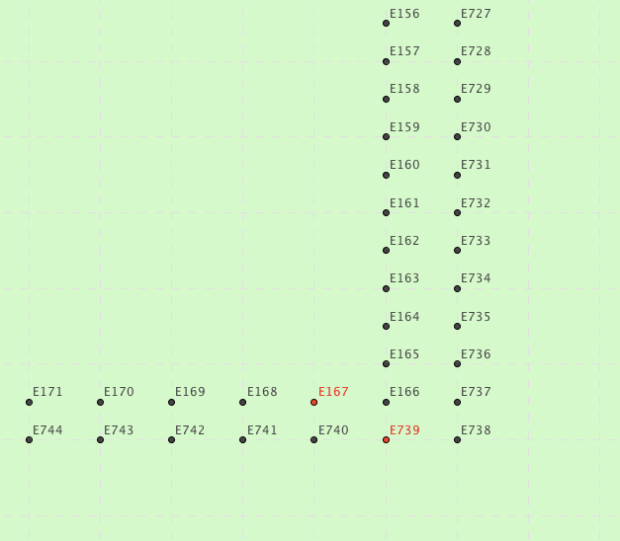 It’s a little annoying, because I wanted a perfect closed for solution.

Wait. WAIT. I have a fix I think… I am going to define M=floor(sqrt(k-1)). The whole idea of having M=floor(sqrt(k)-0.001) is that for values of k which were perfect squares, I wanted M to be one less than the number being squared… so I subtracted out a little piece to make the floor function round it down. But then problems occurred.

Let me check… AND… IT WORKS! And it looks slightly more elegant!

The fix works perfectly (I hope). Here it is in final form (I hope):