Note: This is a guest post written by one of my friends/colleagues Brendan Kinnell.

For a recent job-interview demo lesson, I was tasked with introducing simplifying trigonometric expressions and/or trig identities…my choice! And, geesh, that seemed like a LOT to tackle in less than an hour with students I’ve never met. Sooo, with some serious help from my colleague and an awesome activity from Shireen Dadmehr, I was able to cobble together a fairly solid introduction to simplifying trigonometric expressions with nod towards trig identities.

First, we opened with a nifty warm-up. I had four different problems on half sheets of paper to give out (one easyish algebra problem, one easyish trig equation, one tough polynomial equation, and one tough trig equation). Each student received one problem, and I didn’t announce they were different. I tried to be sure that no two students near each other received the same problem. I told them they had 2 minutes to solve these. “Do the best you can on the Warm-up — this is just to see what you remember. There are a few problems on the back in case you finish early.” (I didn’t really care about the problems on the back, but just in case some students breezed through them, I wanted them to have more to do.) [Intro to Trig Identities Warm-up file]

A few kids with the easier ones solved them pretty quickly, but most other students with the tougher ones were writing frantically. After two minutes (I may have given three minutes in the end), I stopped everyone abruptly and revealed how not all the problems were the same. I made a *BIG* deal about how unfair it was that some people got really “much easier” problems to solve. Specifically, we focused on the polynomial equations. I had one student share a solution to the “easier” equation, and then I walked them through how you can solve the “more difficult” polynomial equation by recognizing a binomial expansion. In the end, the two equations are the same. The same? Yes. The same! “So, if you had to choose which problem you would solve, which one would you pick?” Hopefully, they all agree that the non-expanded form is preferable. But I didn’t want to kick the expanded form to the curb — perhaps some students like the expanded version, and that’s okay. But in the end, they are algebraically identical.

With a bubbling energy in the room, I didn’t even bother to review the other trig-based warm-up questions. We went right to the next part of the lesson. Direct Instruction! Seriously.

I gave them all a little handout with same basic reciprocal trig identities and the basic pythagorean identity.

We quickly filled these out together and then I “worked” through a simplification problem with them [Simplifying Trig Expressions file]. 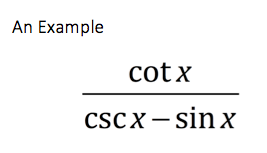 I had prepared about 10 different sheets of paper that had a new expression that was just a slightly altered form of the previous expression. I taped the first one to the board and then I wrote an equals sign next to it. I grabbed the next sheet and taped it alongside it. And then I wrote another equals sign. I had a third sheet ready to go with a bit more simplification. I taped it to the board, and wrote another equals sign. I briefly explained each step, but more often emphasized how at any point, I could use the expression on ANY of the cards to replace the original. It was my choice. Choice!

Every now and then I would untape on of the later sheet and hold it up next to the original expression. “See? These are equal. They don’t look anything alike, but they are fundamentally identical.” Or move any two sheets next to each other. Doesn’t matter. All equal.

Eventually, the original expression gets you to something really simple. I think here you can really play up the fact that it’s surprising that this weird trig expression is essentially just sec x (I think).

So in the end, the kids had this sort of “train” of equivalent expressions, each implementing a slightly different sort of simplification technique. And then, the engaging part.

Finally, I used this brilliant matching activity (http://mathteachermambo.blogspot.com/2014/10/trig-identity-match-up-activity.html) where each group of students (groups of 3 worked really well) gets a bunch of these cards cut out and all jumbled up. (Although I think they are already jumbled if you want kids to cut them out for you!) Ask them to find two cards that “match”. A match being any two cards that are equal by an obvious simplification technique. Students might start slow, but matches will emerge. Give them time.

And what is really cool about this activity is that students will start to recognize that not only are there pairs, but there are trios of matches…and sets of four(!). Students were super pumped to find more than just pairs. “We found a triple!” “We got a four!” They were finding three and four cards that formed a “train” of simplification like the giant one that was currently taped to the board.

In the end I ran out of time to finish the activity, so I didn’t get to see it through. But I believe that Shireen has designed this so that there are four different “trains” of various lengths (up to six or eight cards in length for some of them, I believe. I suggest that you give students time to justify the order of each part of these “trains.” And in the end, I would hope that they could appreciate that every step along the way reveals a new way to denote any other expression in that “train”, and each of these new expressions is available for them to choose.