ARGH! I have too much in my head and don’t even know where to start. I want to blog about all the large and small things I want to take away with me from TMC17, but they are so disorganized in my brain. So I’m just going to do a Faulknerian stream-of-consciousness style post and get some of it out now.

A while ago, I realized when I said “you guys” it was super gendered. So I just sort of said to myself I’ll say “y’all.” When I wrote emails to my classes, I pretty much say “Hi all!” And then… and then… someone brought up the “you guys” issue at a faculty meeting at our school, and in my head I was like “I don’t do that!” But for some reason instead of that reminder doing good, and reinforcing what I was doing, I found it impossible to not say “you guys.” Like when someone points out you say “um” a lot, or say “like” a lot. You just, um, like, end up, like saying it, um, more.

Glenn Waddell spoke about “you guys” at TMC, and it resonated with a lot of people.

So I think I have a plan. Thanks to a huge discussion on twitter (sorry, don’t remember who to cite), here are my options:

The + others was cute… someone recalled they would say: “Humans… and others…” which made me laugh! I think I my lean towards nerds and my loyal subjects because I like whimsy. And as another teacher I love says about her classroom: “It’s a benevolent dictatorship.” @mathillustrated said it’s fun to mix them up. We’ll see what I’ll do!

A thought: I should post this in my classroom so I can refer to it! And tell students what I am trying to do. And have them catch me if I say “you guys” (which of course will make me say it more!). And have an ongoing tally of how many times I say it. And when they reach a certain amount, I’ll bring them some treat. I like the message it sends: I care about words because I care about you. For some of you, these words don’t matter. But I’m doing this for the others of you for whom these words do matter. Also: help me get better because I need to be, and I’m happy to be called out when I mess up.

Other ideas that came up:

@EmilySliman has renamed ‘homework’ as ‘home learning’ [I called it ‘home enjoyment’ because of another colleague, but they have since left me! So I am free to rename it as I please!]
@gwaddellnvhs has renamed ‘student’ (passive) to ‘learner’ (active) [“Learners learn, and students study. I don’t care how much you study. I care how much you learn.” paraphrased from here]
@chieffoulis has renamed ‘tests’ as ‘celebrations of knowledge’ (someone else uses ‘celebrations of learning)

Now do I think things like this will make a difference? Probably not. Calling something “home enjoyment” won’t make kids enjoy it. But it’s stupid and goofy and that’s worth something. And I don’t doubt that making an effort to change language might make a difference to some students. And it can prompt discussion where I get to talk about my values and philosophy around teaching. (“Why do you call tests ‘celebrations of knowledge,’ your majesty?”)  I try to live and act those values, but sometimes talking about them can help too.

I was having dinner at Maggianos with a TMC 1st timer, @pythagitup. Over dinner, he was telling me about a quote board he did where he put funny things kids said up on display. The beaming of his eyes as he recounted his classes and their quote boards made me know he had done something special. I begged him to write a blogpost about it, which he kindly did here. Here are his top 12 quotes: 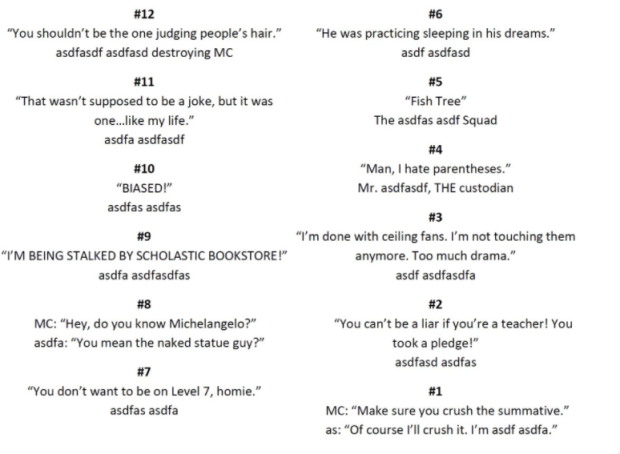 I just got sad as I was writing this part of the post, because I remembered that I don’t have my own classroom. I usually am in two or three different classrooms and share the space with other teachers. So doing things like this are trickier. Sigh. It did remind me of one year in calculus. Years ago. 2012-2013. Back then, I was actually a funny-ish teacher. Like pretty goofy. And that particular calculus class was gads of fun. Good and strong personalities. I don’t know why but in recent years, I have lost that spontaneousness and goofiness that I used to have. I’m much more even keeled. I don’t know what happened. Does that just naturally happen when you grow older? I am up at the board a lot less now-a-days, so maybe that’s it… less class-teacher-class-teacher interaction? Whatever it is, I’ve changed. But back then, we had a goofy class. And all year, a student was secretly taking notes on funny things I said, or funny things kids in the class said. And she gave it to me at the end of the year. It was one of the most meaningful things a kid has done. You want to read some of it? Thought so. Wait, you said no? TOO BAD MY POST DEAL.

I want to do this explicitly in my classroom. I tried a post-it wall of kindness/gratitude once, but that didn’t *really* take off in the way I wanted it to. I probably should have blogged about that to share a failed venture, and why it failed (namely: I saw it as a tack on unimportant thing, so I didn’t build time in class for kids to do it, and also kids have difficulty sharing kindness/gratitude so helping them see different things as kindness/gratitude would have helped too). [I see “nominations” as a way to do this too, and also related to the material! post 1, post 2]

But I saw something super nice. @calcdave was wearing a clothespin clipped to the collar of his shirt. I couldn’t read it but I asked about it. He then gave me a huge bear hug… which I thoroughly enjoyed because @calcdave is awesome and who doesn’t want a hug from him… and then looked at the pin. On the front, it said something like “hugs!” and on the back it said:

And then the person take the pin off and puts it on the other person (I think that’s important… they pin it on!). This then continues… from person to person to person. I love that @mrschz got it from me, and has now bought clothespins, painted them, and written on them. She’s all in!

I am not comfortable hugging my kids. I’m not that teacher very often (until they come back from college and visit). But I could see this going in different directions.

(b) Making a bunch of pins and giving them all out to one class and explaining the purpose. I would have to do this with a class that is totally into stuff like this. I can imagine certain classes having a majority of kids who groan and then throw the clothespin away. So I’d have to choose wisely and come up with a good framing/rollout.

This idea originated with Pam Wilson, who is a true gem.

When this idea made its way on twitter, @stoodle pointed out that @_b_p has done something related in his classroom. And I remember reading this, being like OH MY GOD I NEED TO DO THIS and then promptly forgetting about it. The TOKEN OF APPRECIATION. I mean the name itself gets me giddy!

But I like this idea for a few reasons. First: it is done only once a week. It doesn’t take away from classtime. I can do it during my long blocks (once every seven class days). Kids have all week to think about who they are going to give it to. Kids also get to alter it, so at the end of the year, it is a recollection of good.

I know people are going to hate me for saying this, but this upcoming year, I have small classes. I’m at an independent school, so my classes tend to be small. But I think I remember my tentative rosters being even smaller than usual. I like to have larger classes because I like the chaos and interaction and cross pollination of ideas (though not the grading nor comment writing). But I wonder with small classes this year, will this work? I need to think more about this.

This wasn’t at TMC but I saw it on twitter and wanted to affirm its truth for me.

I am fairly good about this. I have kids sit in groups of 3 but the tables can fit 4, so I tend to just hunker down with groups when talking with them. In most classes, I almost always drag a chair with me from one table to another which doesn’t have one. I agree there is a huge difference between crouching and sitting. There is value in crouching… it sends the message “I’m here to sort of briefly check on you and see what you’re doing but I’m likely going to move on… things are on you… so persevere.” I tend to sit when (a) I need to ask the group a set of questions to see their understanding, (b) a group seems to be getting stuck beyond productive frustration, (c) when a group is having a heated or interesting conversation and I want to listen in [I tell kids to ignore me and just continue, which I know they can’t really do but they do a pretty good job] or (d) when my feet are tired and I just feel like plopping down somewhere. Ha! Just kidding!