samjshah @dcox21 Q: are you at the point where you are going to get a whistle like captain von trapp? “i’m incouragable!” “i don’t need a governess”

dcox21 @samjshah No whistle for me. I pick ’em off one at a time.

Fouss @msgregson I just wonder if there are other little groups of math teachers floating around. Or if we’re “it”.

calcdave @Fouss Well, most of the cool ones are here already it seems, eh?

Fouss @calcdave @msgregson True. They couldn’t be any cooler than we are. :)

JackieB Hey, I made it into @samjshah‘s favorite tweets post! Sorta. I quoted @chrislehmann. Alas, I guess my students are right – I’m not funny.

cannonsr I finally got to wear my Twitter t-shirt today! Thanks @samjshah. (Join the club @k8nowak!)

JackieB @k8nowak Can you get me one too while you’re at it?

k8nowak Matt & Scott just stopped by for a game of “one-dimensional infinite tic tac toe.” Matt: “It’s pretty much the worst game ever.”

CardsChic @misscalcul8 @k8nowak Speed dating game and they do all the work?? I’m listening…

CardsChic @misscalcul8 @k8nowak Haha! Thanks – I’ll have to add that to my list… and this is why I love Twitter. :)

misscalcul8 I feel like suh a bad teacher when I give out worksheets.

CmonMattTHINK One of my advisees audibly contemplated inducing vomiting so as to get out of going to her Precalc class.

MitchKeller An unnamed colleague: “If I were going to go back in time and kill someone, [Walter Rudin] would be at the top of my list.”

CmonMattTHINK @samjshah I feel the same about the similarly-named Royden, whose Real Analysis text I regularly referred to as “Hemorrhoyden.”

busynessgirl At the point where you accidentally “grade” the answer key, it’s time to go home.

BuiltOnFacts When the department email begins with “Here is an update on the odor in the building”, I am not optimistic.

dcox21 @samjshah I’m really liking you for putting all those great resources in one place. I forgive you for not taking me up on the dinner offer.

samjshah @dcox21 and i thought you liked me for my dashing good looks and quirky sense of humor. you are SO superficial.

k8nowak For a while there I thought it was Thursday then I realized it’s Wednesday but we have Friday off anyway so it’s all good.

k8nowak If one more kid comes up and says “Calculator?” with out any additional words, or a “please,” I’m going to shove one up his butt.

misscalcul8 @k8nowak You didn’t wanna say butt, did you?

k8nowak @misscalcul8 Rage. I have it.

samjshah @k8nowak http://brizzly.com/pic/1Y7D and i definitely think i should get points for saying “peggy hill”

madcaptenor Human beings bond by talking shit about other human beings. This is why I don’t like human beings, and identify as an icosahedron.

k8nowak @samjshah “Works well when under constant supervision and cornered like a rat in a trap.”

k8nowak @samjshah “This young lady has delusions of adequacy.”

calcdave How do you solve an integral like Maria?

CardsChic Me: I’m not touching that with a 10 foot pole. Boy: How about a 9 foot one? #ILoveMyStudents

JackieB If you share your deepest fears about yourself as a teacher with someone, and they start laughing, does that mean your fears are unfounded?

msgregson My favorite users are @misscalcul8 @Fouss @samjshah ! Perhaps this is love ;) http://twtlab.com/love/

samjshah @msgregson perhaps this IS love… like the “mmm cheesy fries” love, though, not the “put a ring on it” love

msgregson @samjshah how did you know that cheese fries are my favorite? you really know the way to a girls’ heart.

samjshah @msgregson then when you come to NYC, we have to go to a place i discovered this weekend, with the best OOEY GOOEY CHEESY TOTS!!!!!!!

park_star my students have started making fun of one another by calling each other “cylons.” i heart nerds.

pepepacha Good Idea: Having my 8th graders prepare a math fair for our elementary students to distract them from premature “senioritis”

CmonMattTHINK If f & g are both increasing on a given interval, then so is fg. If true, prove it; if false, give a counterexample. (LOVE q’s like this)

ddmeyer What’s your #NCTM day 1 scorecard? I posted 3 walkouts and 2 headbangers that tossed my grey matter like a spinach salad. Overall, a win.

k8nowak @JackieB Normally I can’t help but make my sarcastic comments out loud. I make a lot of friends at conferences.

jbrtva @k8nowak @JackieB I, too, love making snarky comments at conferences to make friends with the people around me. :-)

k8nowak @JackieB @jimwysocki @jbrtva To clarify, by “make a lot of friends,” I meant “totally alienate everyone within earshot.”

k8nowak @JackieB @jimwysocki @jbrtva But hey, if you don’t have anything nice to say, sit next to me!

cannonsr @JackieB @k8nowak et al. I write the snarks in my notes. And pass to share with the neighbors.

jimwysocki Got a take-away from my first session. Challenge students to bring in problems for me, demonstrate struggling.

jreulbach @Fouss they will – too much! Better review your calm down quote. I say 3-2-1 they say math is fun.

samjshah i’m jealous, all. can we plan to go to a conference together next yr? maybe we should just plan our OWN small conference abt blogging?

samjshah that last tweet was for everyone at NCTM and everyone else who is JEALOUS of them. im kinda serious about hosting a conference. NYC?

k8nowak @samjshah How about next Wednesday?! j/k. I think some prior coordination to invade a conference would be nice.

SweenWSweens @samjshah I’m in, got such an idea in October, but was waiting for more street cred to suggest it.

dcox21 @samjshah Thinking the same thing. Think I’d get more from talking to people I already know I respect than from rolling dice on conference.

mctownsley @dcox21 @samjshah what’s the name of this math/blogging/twitter/teaching crew? seems like a good start for a mini-conference

samjshah @dcox21 @CmonMattTHINK @k8nowak @SweenWSweens i know the good ones, just so you know. the right mix of dive and quality craft beers.

SweenWSweens @samjshah @dcox21 @CmonMattThink @k8nowak There’s gotta be bars in NYC that sound like they could be conference venues.

samjshah 1. go to NCTM conference, 2. meetup at nyc bars, 3. hold our own miniconference (designed to be useful), 4. do nothing and let the idea die

cannonsr @SweenWSweens Like the bars called “The library” near university campuses. Totally

jreulbach @samjshah YOu had me at NYC bars…

samjshah @k8nowak et al. yes. our own format. about interactivity, convos, playing with the web. less about leaders and more about those coming.

samjshah @k8nowak wow, i’ve seen that *in theory* before (see this cool site), but never used in practice. OH SNAP!!! @jreulbach got served!

SweenWSweens @samjshah Sounds like those venues are the start of a sweet summer 2010 “conference” where we could brainstorm about any future ones.

k8nowak @samjshah @jreulbach I feel kind of bad for picking on the noob. Sorry. I’ve been waiting for an excuse to use lmgtfy.

jreulbach I am in for summer. No kiddo or new job conflicts…

SweenWSweens @samjshah @k8nowak Any1 else close ? The Internet is so weird, everyone is so spread out. How do the tubes bring things so from so far away?

k8nowak @SweenWSweens @samjshah I don’t know who else is near-ish, but we could announce on blogs and see who bites.

CmonMattTHINK @SweenWSweens @samjshah @k8nowak Yeah how does there not exist a Google Map or something with all of our locations on it?

SweenWSweens @samjshah Ugh haytchu, I was literally typing the one I had just made in. You win this round! But watch your back!

cannonsr @samjshah Loving how this map has 63 views within 10 minutes.

SweenWSweens @samjshah @k8nowak I’m not sure posting on my blog will help, as seen in figure 1-a http://mobile.tweetphoto.com/19648985 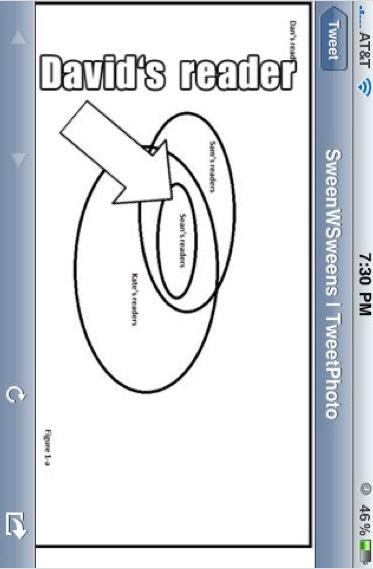 samjshah ha! my dad sometimes sends me random links he thinks i might find interesting. today he sent me a link to @ddmeyer‘s blog. HA!

ddmeyer @samjshah My folks do that too. Can’t decide whether to be insulted or worried.

SweenWSweens @samjshah next week your mom will send you a link to my blog!

samjshah @SweenWSweens @cannonsr i feel there is a good “yo mama” joke in all of this. i just am not all that excited to hear it.

k8nowak @ddmeyer Wow. I hope you brought the big backpack.

ddmeyer @k8nowak Seriously. And check this: he just ran out of handouts and has offered to send them out to latecomers … BY US POSTAL MAIL!

dcox21 @ddmeyer @k8nowak What’d he make those handouts with a typewriter?

dcox21 @ddmeyer If I caught the sacrasm, you had enough. Note to tweeps: if Dan starts out with “Hey, guys,” it’s gonna be sarcastic.

ddmeyer Hey you guys! Has anybody heard anything about this “Singapore Math”?! #nctm10

ddmeyer Obvs. I didn’t pour enough sarcasm onto my last tweet. I’m drinking a shot of Wild Turkey whenever a presenter refers to “Singapore Math.”

CardsChic @dcox21 @JackieB Wait… so since I teach English for 1/8 of my day, is it okay that some of my students want to hug me sometimes? ;)

JackieB @dcox21 Yeah, I admit it. I hugged at NCTM.