I’ve been mulling over how to introduce trigonometry to my geometry students. I think I’ve finally figured out a way that is going to be conceptually deep, and will have kids see the need for the ratios.

I don’t know if all of what I’m about to throw down here will make sense upon first glance or by skimming. I have a feeling that the flow of the unit, and where each key moment of understanding lies, all comes from actually working through the problems.

But yeah, here’s the general flow of things: 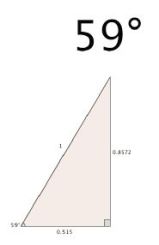 Finally, students are given names for these ratios — sine, cosine, and tangent. And they learn that their calculator has these table of ratios built into it. And so they can use their calculator to quickly look up what they need in the table, without having the table in front of them. Huzzah! And again, students solve the same problems they previously solved with the book of triangles and the table of values, but with their calculators.

It’s a long post, so there’s much more below the jump…

I am going to begin by having students start seeing every right triangle they see as similar (or, to be technical, close to similar since these only have integer angle measures) to one of the right triangles in this book, titled the Platonic Right Triangles book. (If you want to know where Plato comes in, check out the packet…)

The big idea of this first packet is getting kids to see that all right triangles are similar to this “Platonic” set of right triangles, and given a right triangle with a particular angle, they can use that fact to find missing sides of triangles with very little effort, by setting up a proportion.

This is the backwards question: Given a triangle with some side lengths, can they find the missing angle? At this point, all they have is their Platonic Right Triangles book. Mainly, the first few pages of this packet has kids try to figure out how they can use the book to find out the missing angle. They’re going to struggle at first, and have various approaches to it, some of which will be more efficient than others. But I see the first four pages of this packet, their struggle, and most importantly the group and class conversations we have based on their approaches, to be the key thing here.

The important of these ratios gets highlighted with some simple work with this simple Geogebra applet.

From here, we collapse our Platonic Right Triangles book into a simple Table of Right Triangle Ratios. An eighty-nine page book that can be represented in a two page table.

Students hopefully will finish this worksheet seeing the usefulness of ratios in a right triangles, and being able to use a table of values to help them find missing sides and angles.

This is a classroom opener. It came about when my co-teacher recognized that we never actually need all three ratios… the only reason we have all three ratios is for convenience. And so I whipped this up to get kids to recognize that fact.

Then there are some challenging conceptual questions that students will hopefully be able to answer, which require them to understand the geometric understanding of the trigonometric functions.

I don’t think that special right triangles are all that important, but I know that I ought to expose my kids to them. So I made this…